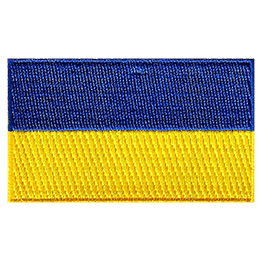 
The Ukrainian Flag is the symbol of Ukrainian independence and has been since it was officially adopted as the country's state flag since 1991. This flag is composed of 2 equally sized horizontal bars of blue and yellow, colours derived from the flag of the Kingdom of Galicia-Volhynia. Ukraine celebrates the Day of the National Flag every August 23rd.

Just wanted to say that I really enjoy your crests and am also very proud to present them to the other girls/leaders. You and your company are doing a fine job and keep up the good work. I will be using your crests for the upcoming year through my Sparks Program.

I received the badges, and they are fantastic! Thanks so much! I also really appreciate the fact that you cared that I got them on time! Thanks again so very much! The girls are gonna love these.

We received the patches yesterday. It's really nice!! We're very happy. Thank you for the good work of you all!!